Google GPDR Consent. AdMob Error: IAB TCF v2.0 errors detected We’ve detected an issue on your IAB TC string on one or more of your sites or apps

After implementing google UMP SDK to get consent for EU users I faced following error on AdMob (iOS and Android apps):

IAB TCF v2.0 errors detected We’ve detected an issue on your IAB TC
string on one or more of your sites or apps. These errors may affect
your ability to serve ads to European users. A detailed report is
available for you on the EU user consent page.

In downloadable .csv file I see the following:

But there is no info how to do this through SDK.

Do you know how to fix this? As it looks like I loosing all traffic for EU users in this case.

DISCLAIMER: this is just my experience “AS IS”, maybe I’m missing some important details, then please let me know!

Also had this error after app update, and finally after few attempts it has disappeared. I’m not an expert in GDPR, just want to share my experience, maybe (hope) there is a better solution.

What I’ve tried (don’t do this, it didn’t removes AdMob error):

After every of this attempts I still got error message. I know it requires time to disappear, if no new errors comes, but after few days errors count was increasing, and even newly added ad units were in report, but I added them in app version without UMP lib.
After reading some TCF strings docs, I realized that TCF strings still exist on user devices and AdMob uses them. After logging all default shared prefs I’ve got something like: 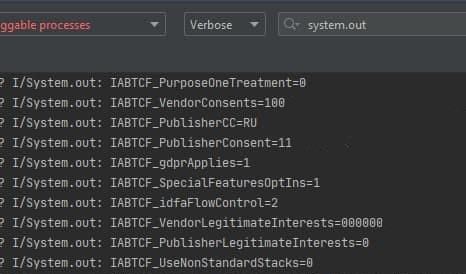 So, next I released an app update, with TCF strings cleanup on app launch:

Then soon I saw less errors in TCF error report, and after about 10 days TCF error banner has disappeared. Also I enabled personalized ads again, cause this doesn’t cause a problem. To sum up, solution that works for me is:


Our dedicated development team is here for you!

We can help you find answers to your question for as low as 5$.